On Wednesdays, MomAdvice shares lots of great finds on her Notebook Experiment. Clear back in March, she shared the link for Homemade Corn Dogs from Chaos in the Kitchen.

I finally got around to making these and they were such a hit in our house, I wanted to share them with you. 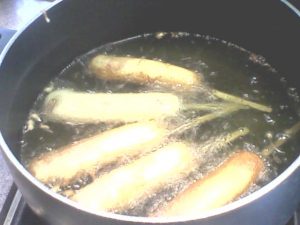 Here is the recipe that I used from All Recipes

I did make some adjustments and they turned out just fine. I used milk instead of buttermilk and I did not add the bacon drippings.

To make them, I started with sticks that I found in the craft department at Walmart. I think they were about $2.60’ish for the whole bag and I have tons leftover. 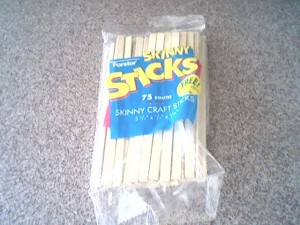 I inserted the sticks into the hot dogs, laid them on a tray and patted them dry. I used 2 packages. 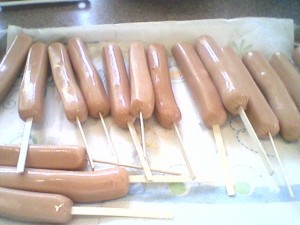 Next, I did take the advice from Chaos In The Kitchen, which is where I read about making them. I poured the corn meal mixture into a tall glass for ease in dipping. This worked really well. 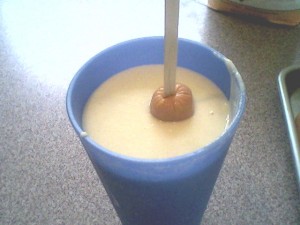 Now, here is where I went a little wrong, and will do differently next time. I laid the corn dogs on a tray, thinking I would get them all dripped and then fry them. Well, the corn meal mixture wasn’t quite thick enough and it dripped off the hot dogs. 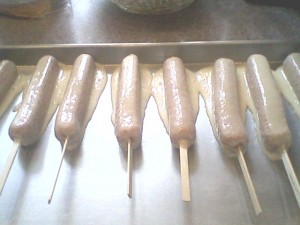 So, then I put them in the frig to chill a little, thinking they would firm up. Which they did, but I still had to re-dip them. I had plenty of corn meal mixture, so it wasn’t a big deal. Then I fried them several at a time, in a large pan. I was wishing I had a large frying skillet, but I don’t, so I made do.

I did not find them to be labor intensive, like Chaos In The Kitchen did. I thought they were fun and the boys thought it was cool to have homemade corn dogs. We will definately be making them again. 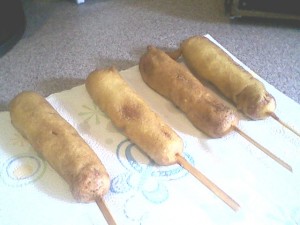